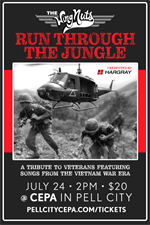 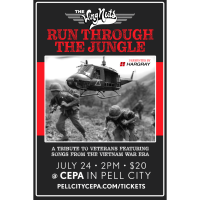 The Wingnuts: Run Through the Jungle

In 2019, Pell City was treated to a stand-out concert by a premier group of musicians, and it became one of the most storied shows in CEPA’s history. Presented by Hargray, on Sunday, July 24, “Run Through the Jungle” by The WingNuts returns to the CEPA stage. Named after the iconic Creedence Clearwater Revival song, “Run Through the Jungle” is a spectacle of sound and visuals.

Join Band Members Alan Furr, Sandra Furr, Donnie Todd, Mickey Farmer, Elizabeth Money, Glenn Wilson, and Bobby Breed as they take you note-for-note through the songs that defined the Vietnam War Era, complete with the stories and photos that shaped America’s memory of that period in history.

This performance is a tribute to America’s veterans and will be held Sunday, July 24 at 2 p.m. at CEPA in Pell City. For more, follow the band on Facebook ( The WingNuts ) or sign up for CEPA’s email newsletter at pellcitycepa.com/newsletter.

The WingNuts are a group of aviation buffs who enjoy playing music from primarily the 1960s-80s. Three members are pilots and all enjoy playing in their home hangar at the St. Clair County Airport. 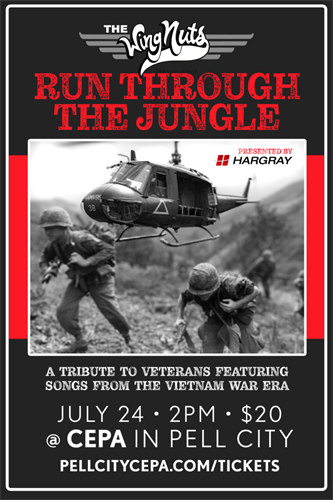